Olot, the capital of La Garrotxa county, is situated in a plain crossed by the Fluvià and Riudaura rivers and surrounded by the mountain ranges of Sant Valentí, Aiguanegra, the high plateau of Batet, Marboleny and Sant Valentí de la Pinya.

Olot, "the city of volcanoes", is known especially for its natural attractions and for being part of La Garrotxa Volcanic Zone Natural Park. Within the city boundaries there are four volcanoes: Montsacopa, Montolivet – these two can be visited -, Garrinada and Bisaroques. The areas around Olot also enjoy a rich natural heritage with the marshes of La Moixina and the Croscat volcano. The Parc Nou botanic garden is also remarkable.

The city of Olot has an interesting cultural heritage. Among the architectural highlights are several modernist-style monuments (the houses Gayetà-Vila, Solà-Morales, Masramon...), as well as the Renaissance Claustres del Carme. These cloisters are part of Olot School of Art, and have the following opening hours:

Sundays and holidays: from 10h to 13h

Rest of the year:

Sundays and holidays: from 11h to 13h

With regard to painting and sculpture, the importance of the Olot School has to be noted and there is a good display of pieces in the Museu de la Garrotxa.  Painting, sculpture and ceramics are key elements of Olot’s artistic surroundings, as is the great tradition of nativity scene making and the world-renowned saints’ workshops. 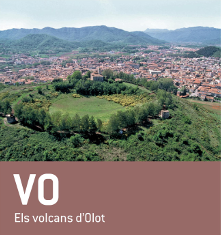 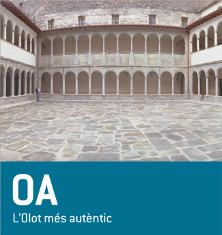